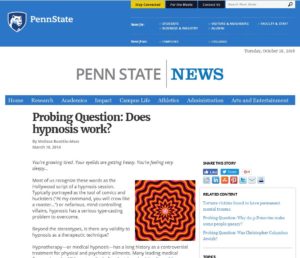 Most of us recognize these words as the Hollywood script of a hypnosis session. Typically portrayed as the tool of comics and hucksters (“At my command, you will crow like a rooster…”) or nefarious, mind-controlling villains, hypnosis has a serious type-casting problem to overcome.

Beyond the stereotypes, is there any validity to hypnosis as a therapeutic technique?

Hypnotherapy—or medical hypnosis—has a long history as a controversial treatment for physical and psychiatric ailments. Many leading medical figures since the 18th century (including Austrian physician Franz Mesmer, for whom the verb “mesmerize” was coined) experimented with putting patients into trance states for healing purposes. Determined to know whether this new medical treatment was genuine or a hoax, King Louis XVI of France commissioned a panel of experts, including Ambassador Benjamin Franklin, to investigate Mesmer’s claims. In 1784, the “Franklin commission” released its report, which found “mesmerism” to be “utterly fallacious” and without merit.

“It has taken centuries for medical hypnosis to regain credibility,” says Penn State psychology professor William Ray. “In the 1950s, reliable measures of hypnotizability were developed, which allowed this research field to gain validity. We’ve seen more than 12,000 articles on hypnosis published since then in medical and psychological journals. Today, there’s general agreement that hypnosis can be an important part of treatment for some conditions, including phobias, addictions and chronic pain.”

Ray’s own research uses hypnosis as a tool to better understand the brain, including its response to pain. “We have done a variety of EEG studies,” says Ray, “one of which suggests that hypnosis removes the emotional experience of pain while allowing the sensory sensation to remain. Thus, you notice you were touched but not that it hurt.”

More recent research using modern brain imaging techniques show that the connections in the brain are different during hypnosis. In particular, those areas of the brain involved in making decisions and monitoring the environment show strong connections. What this means is that under hypnosis the person is able to focus on what they are doing without asking why they are doing it or checking the environment for changes.

Despite increasing recognition by the medical establishment, popular myths about hypnosis persist, such as the belief that it is a truth serum, that it causes subjects to lose all free will, and that hypnotists can erase their clients’ memories of their sessions.

In truth, hypnosis is something most of us have experienced in our everyday lives. If you’ve ever been totally engrossed in a book or movie and lost all track of time or didn’t hear someone calling your name, you were experiencing a state similar to a hypnotic one.

The hypnotized person is not sleeping or unconscious—quite the contrary. Hypnosis (most often induced by a hypnotherapist’s verbal guidance, not a swinging pocket watch) creates a hyper-attentive and hyper-responsive mental state, in which the subject’s subconscious mind is highly open to suggestion. “This doesn’t mean you become a submissive robot when hypnotized,” Ray asserts. “Studies have shown us that good hypnotic subjects are active problem solvers. While it’s true that the subconscious mind is more open to suggestion during hypnosis, that doesn’t mean that the subject’s free will or moral judgment is turned off.”

Are some people more easily hypnotized than others? “Yes, although the reason is not clearly understood,” explains Ray. “Hypnotic responsiveness doesn’t seem to correlate in expected ways with personality traits, such as gullibility, imagery ability or submissiveness. One link we’ve found is that people who become very engrossed in day-to-day activities—reading or music, for example—may be more easily hypnotized.”

In the late 1950s, Stanford University was the first to establish a reliable “yardstick” of susceptibility (aptly called the Stanford Hypnotic Susceptibility Scales). Through subsequent studies, researchers learned that 95 percent of people can be hypnotized to some extent (with most scoring in the midrange on the Stanford Scale) and that “an individual’s score—reflecting the ability to respond to hypnosis—remains remarkably stable over time. Even twenty-five years after their initial Stanford Scale tests, retested subjects were getting almost the same scores, the same level of hypnotic responsiveness.”

Understanding the exact mechanism behind hypnosis may require decoding the workings of the unconscious mind. While it may be near-impossible to arrive at that knowledge, hypnosis has come a long way since it was debunked by The Sun King’s commission. Who knows? If he could review the case today, Benjamin Franklin might even be persuaded—(“You’re getting sleepy… Your eyelids are getting heavy…”)—to change his mind.

William Ray, Ph.D., professor of psychology, can be reached at wjr@psu.edu.